I decided to go quiet on Twitter until after the election. But I had to document my thoughts in writing one last time before 11/3/2020.

Back in 2016 I was confident Hillary would win, but I did post two tweets running up to the election that belied my insecurities: here (11/4) and here (11/8). Now that we're a week from Election Day, I'd like to reflect for the record that I think this time around may be a blowout for Biden & what it means.

Two days after the 2016 election, I posted a bit of analysis on the numbers and takeaways. Mainly my point was that Trump's win was a razor-thin margin across MI + PA + WI & that demographics would make 2020 an even harder win ("hinge" election notwithstanding). I stand by my conclusions, although the certified numbers did shift somewhat (in Hillary's favor, actually). As many people have pointed out, third party voters & low turnout won't be the same factor this time around.


"as of this writing, an alleged practitioner of radical Christian terrorism remains a state legislator in Washington."

You really have to read about Matt Shea to believe it is even real:


"Last year, the chair of the Republican caucus in Washington’s state legislature acknowledged that he had written a manifesto on the 'Biblical Basis for War.' In that document, the lawmaker argued that – as far as Jesus Christ was concerned – American Christians have the right to 'kill all males' who support abortion, same-sex marriage or communism (so long as they first give such infidels the opportunity to renounce their heresies).

The manifesto’s revelation cost its author, Matt Shea, his chairmanship. But Shea insisted that his writings were merely 'a summary of church sermons on Old Testament war that could help place current events in historical context.' And so, the Washington GOP did not call for Shea to resign or expel him from its House caucus. [emphasis mine]"

Although they finally suspended him from the caucus when more information came out, the fact that Republicans in Washington kept a white Christian terrorist in their protective circle tells you all you need to know...notwithstanding my hyperbolic use of #AmericanTaliban.


"At various points in his strange career, State Representative Matt Shea of Washington’s Spokane Valley has called for a holy war on liberals, advocated for eastern Washington to secede from the union, and spoken to meetings of the John Birch Society. Now, despite a new report that details his participation in a disturbing far-right group chat, Shea, a Republican, is clinging to power. His party seems reluctant to condemn him."

I wrote about Christian theonomy about 13.5 years ago...jeez the more the change, eh?

Was reading a bit about automatic writing by Yeats this morning and his interest in the occult, which led to discovering a text from Sinnett called Esoteric Buddhism. Like many morning reading sessions, one click led to another, and I found a few quotes I wanted to save for posterity's sake. Warnings against fundamentalism and fear of The Other are on my mind a lot lately...but the beauty of the bold type deserves to be saved (my emphasis added).

Perhaps to understand the hatred of the fanatic, we must study how one acquires a blamelessly devoted attitude of mind:


"Nothing can produce more disastrous effects on human progress, as regards the destiny of individuals, than the very prevalent notion that one religion followed out in a pious spirit, is as good as another, and that if such and such doctrines are perhaps absurd when you look into them, the great majority of good people will never think of their absurdity, but will recite them in a blamelessly devoted attitude of mind." (Sinnett 1885, pp. 194–195; Guénon 2004, p. 126.)


"It is priestly imposture that rendered these gods so terrible to man; it is religion that makes of him the selfish bigot, the fanatic that hates all mankind out of his own sect without rendering him any better or more moral for it. It is the belief in God and gods that makes two-thirds of humanity the slaves of a handful of those who deceive them under the false pretence of saving them." (Barker 1924, Letter 10.)

rise of the "nones"

Is the shift away from religion a true zeitgeist or a passing fad?

After reading an article in today's NYT about the rise of "religious nones" -- people who respond "no religion" when surveyed -- with a cool accompanying graph, I decided to dig back through some archives and put together a few years' worth of info. (I've put much the same sort of thing together before a few times.) 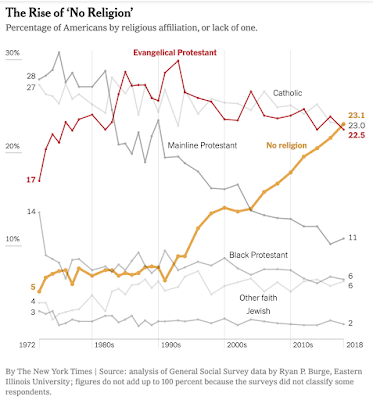 At this point our "so-called 'president'" is in a full-blown panic, likely sweating the sheets orange at night, tossing & turning as he imagines Mueller's noose tightening around his flabby neck. 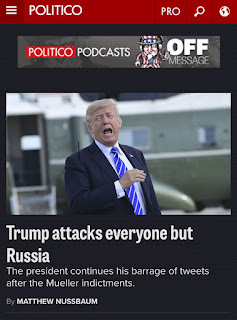 I just looked back eight months ago at the post on the election and thought I should update a few key facts. First, the numbers I used on 11/11/16 were not certified and were inaccurate. While certain takeaways about turnout are still true, the numbers used changed. For example, Hispanics had the lowest turnout of any demographic, just under 50%, which helped elect Traitor Trump.

Traitor? Yes. The last time I wrote, we were all listening to adamant denials of any meetings with any Russians, period. Yesterday we listened to Kushner try to explain why he left four separate Russian meetings off his security clearance forms. Back to the election numbers...

Here is the most important set of numbers:

I'm still just trying to absorb that we elected an orange reality TV star as our president. It just hasn't sunk in yet.

I could say what a million other people have said, but all I can take away from the reality of our election is that there is good news ahead. Before I get to that, look at the tale of the numbers with no spin or partisanship: Republicans barely, barely eeked out this win.

Please respect my privacy and refrain from posting personal information. More on that here.